Eyebrow threading technique has a long history as it was used in the ancient world, in particular in Asia & the Middle East. These days the technique is regaining its popularity especially among women with sensitive skin who prefer eyebrow threading to other commonly used methods, such as tweezing and waxing. Eyebrow threading is more skin sparing than waxing as it leaves the surface layer of skin undamaged thus preserving natural protection from sun rays. In addition, this technique allows women to achieve the desired effect of kempt eyebrows with clearly-shaped lines framing the eye.

Why do women chose eyebrow threading?

There is a growing demand for the eyebrow threading service in salons worldwide, in particular, in the USA. It is an alternative to other wide spread methods, such as waxing, sugaring or tweezing. The principal advantage of this eastern technique is minimizing discomforting feeling associated with painful and skin damaging hair removal during waxing. Another benefit relates to saving money and time, as eyebrow threading provides a long-lasting effect due to removing hair from the root.

Women also value the very manner of eyebrow shaping which is carried out both from underneath and the top. In the process of tweezing, especially performed at home, removing unwanted hairs may lead to holes and divots in the eyebrow shape. There are certain hairs in the eyebrow line which function as supporters for the whole brow playing a critical role in creating its shape. These hairs’ removal can seriously destroy the entire shape or online stopwatch. This problem is not typical for threading technique. 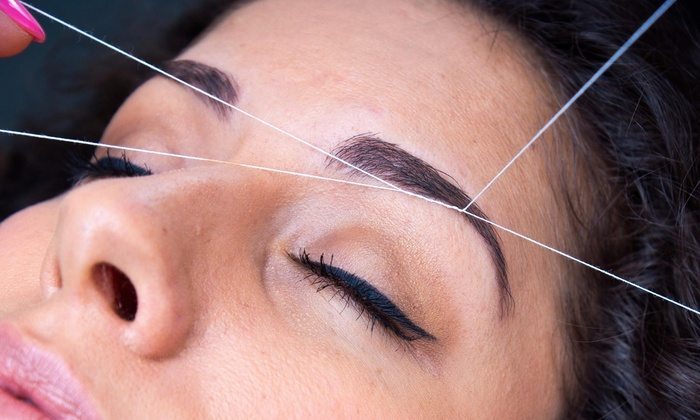 The advantages of threading:

What is specialist’s attitude about threading?

Threading eyebrows procedure is advised by healthcare professionals especially for those who use Accutane/RetinA for their skin. The good news is that this procedure doesn’t have strong influence on skin, unlike other removal techniques.

However, a little pinkness on the treated skin area is normal, but it usually disappears in 10-15 min. In rare situations, treated area can remain pink (red) for 30 to 60 min.

Many people who have acne after waxing procedure or hair removal creams get rid of this problem after changing to threading. If skin is ultra sensitive, it isn’t recommended to use aloe gel or any lotion usually applied by threading specialist.

An expert can rub a special ice cube into the treated skin area for 10 min and then dry it. It is advised to refrain from applying any skincare products for several hours as long as the skin is sensitive.

Tell Me More
Book An Appointment
View Our Brochure

Page load link
Shopping cart
There are no products in the cart!
Go to Top